Optionally this basic function can be extended by a 3D- or 2D-automatic as well as various additional features.

OptiSway® eliminates the load oscillation in long and cross travel direction to the greatest extent or - by using a pendulum angle sensor - practically completely.

In this mode the hoisting gear is not influenced by OptiSway® and can be actuated by the crane operator during long and cross travel without any restriction.

This will not have any impact on the function of the sway control system.

When deflecting the master controller (joystick), OptiSway® brings the load to the desired speed.

To do so, OptiSway® performs the acceleration of trolley and/or crane drive with an optimized velocity curve, i.e. not with a ramp. 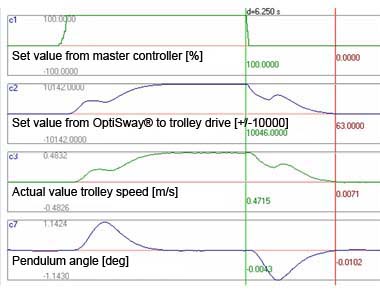 At the end of the acceleration phase, load and trolley / crane drive will have reached the same speed.

Thus, the load hangs still, i.e. without pendulum movements under the crane.

When releasing the master controller, OptiSway® brings the load to a sway-free hold.

As soon as the standstill has been reached, OptiSway® initiates the shut-down of the drives.

OptiSway® softly raises the load off the ground, brings it to the required transportation height, starts trolley and crane drives and moves these drives in coordination with the hoist movement.

As soon as the horizontal target coordinates have been reached, OptiSways® lowers the load and places it softly on the ground or - depending on the pre-selection stored in the crane PLC - brings it to a sway-free standstill in the air.

If required, information on restricted areas can be sent to OptiSway®, which then will be horizontally bypassed. 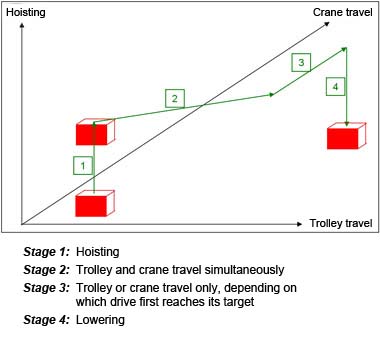 The hoist can be run with load-dependent field-weakening, i.e. with light loads it is possible to run the hoisting drive above its rated speed.

In this case, OptiSway® will automatically calculate the allowable hoist drive speed.

In OptiSway® systems without intervention on the crane drive mechanism (Ship-to-Shore container bridges, grab ship unloaders, cable cranes), the load is moved in automatic mode along an optimized spacial trajectory over the obstacles between start point and target point. 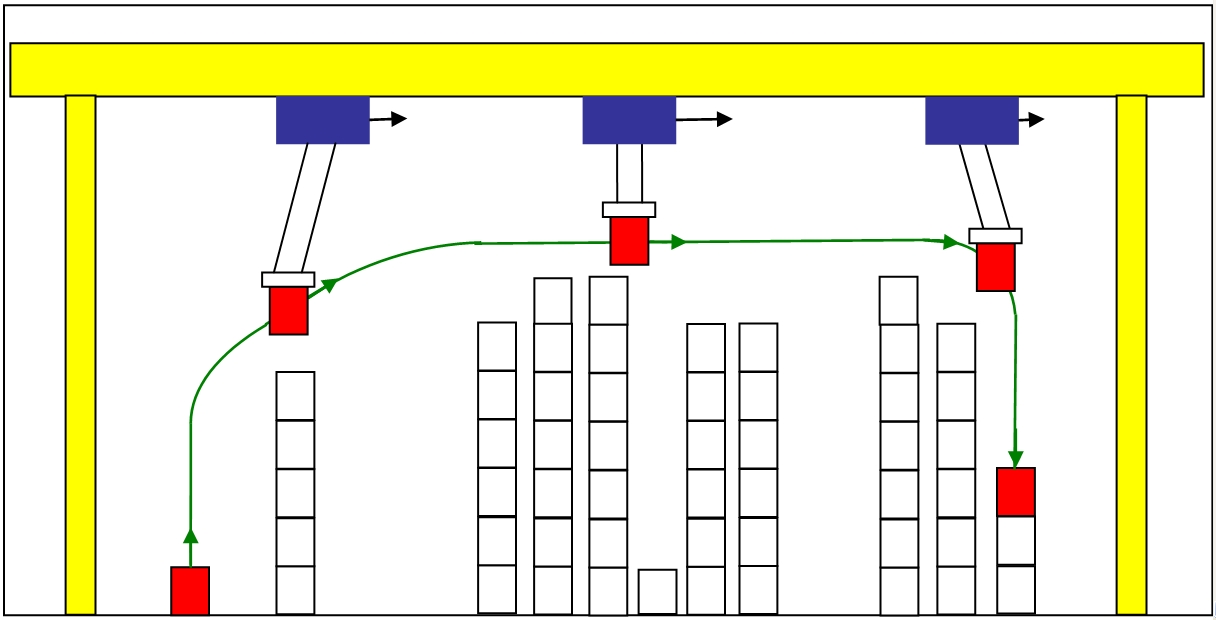 If required, OptiSway® can be extended by the following features:

Rotational sway control avoids the rotational oscillation of the load handling attachment, which occurs without such control during activation of the slewing gear and after its stop. It permits a quick positioning of the load in the desired direction.

CATS has applied for an intellectual property right on this technology. 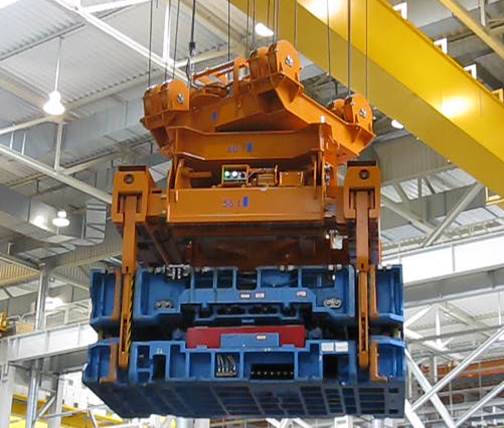 Turning of press tools into the desired position

Rotational sway control can be operated in parallel with pendulum control as well as with OptiSway® automatic mode.

Thus, OptiSway® can simultaneously control all directions of load movement:

You are here: Home > System OptiSway® > Functions / Operating modes
Back to Top